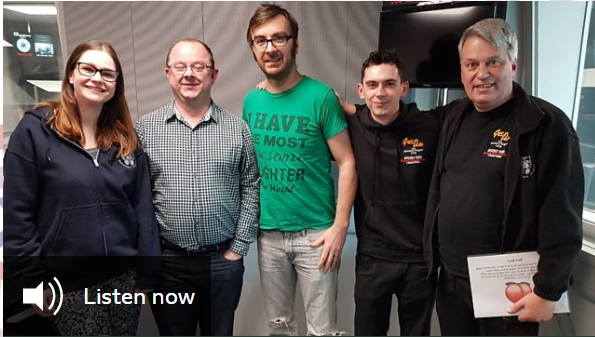 On Saturday 2nd March, four of our cast members, Michael, Josh, Chris and Emma, woke up early and headed to the BBC Radio Berkshire studios. They called themselves “Guys and Doll” and sat down with their maps, tablets and stylish headphones to join Andrew Peach on his Saturday morning Peach Quest.

The objective: riddles are read out and the team have to work out a location or event happening in Berkshire and direct Anoushka and Roger who are travelling in a car. Once they arrive, if they have directed them to the right place hopefully they receive the next clue! Local knowledge is helpful as well as knowing what events are happening that day. The team have to solve all the clues in the time limit to win the quest (and a peach!).

Emma and Michael have been part of a previous team, which last year narrowly missed out on completing the quest (blamed on Roger’s toilet break) but with new questers Josh and Chris, “Guys and Doll” were ready to take it on! 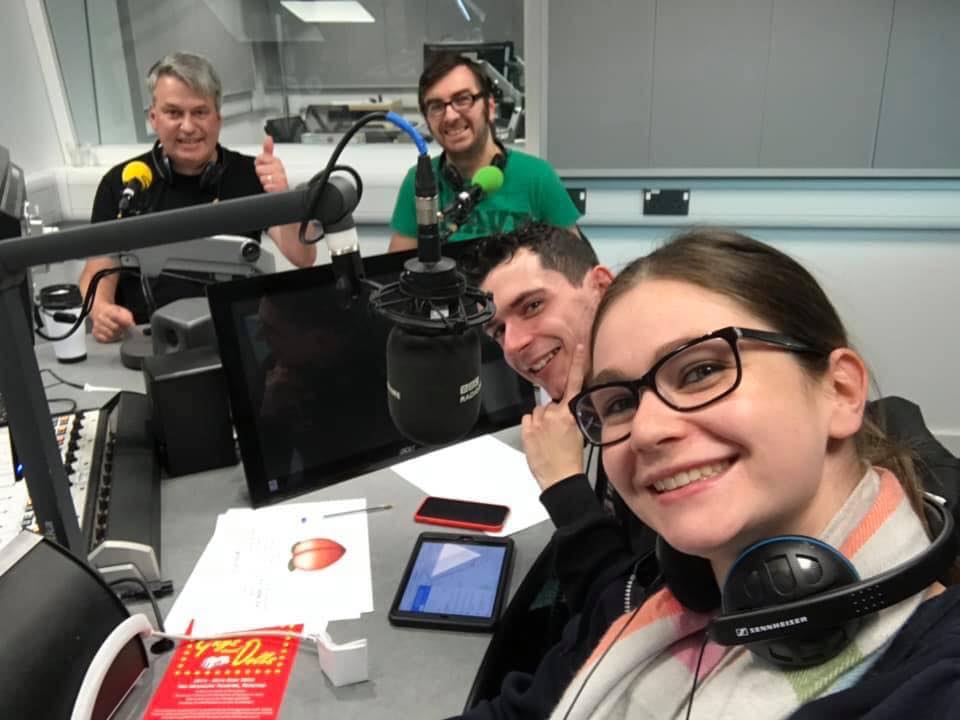 They started in Yattendon, near the Royal Oak and the first clue was: “Your first port of call is home to marmosets and periwinkle, but make sure that within the tree growth you don’t get caught, if the water starts to sprinkle. Within Hamstead Norris is waiting at your destination, I’ve tried to trick you on the way, can you work out your first location?” which led them to the Living Rainforest.

I found it extremely exciting each time we worked out the clue and thought we worked perfectly as a team. [Emma]

Clue 2: “Off to a place where Hannover’s old stories are being told, at the place where John Carr expressed his ideas, no matter how bold. Feel free to explore these grounds but Donald’s Indian herb won’t be anywhere to be found. If you unscramble my riddle, we’ll be one step closer to a new Questmaster being crowned.” which led them to Basildon Park.

It was great fun – I’d definitely do it again. It wasn’t without its issues (i.e. Anouska wasn’t great at listening) but I guess that’s one of the quirks/challenges! [Chris]

Clue 3: “To find the next clue you will need to head away from the beaten track, to the saxon angles land the Danes once tried to claim. At this holy site Carol is waiting in the pews which stand back to back but if on the way you get lost Rog will be to blame.” which they deducted as St Mark’s Church on Englefield Estate.

I really enjoyed the experience. Some great laughs with a great team of people and some wayward anagram guesses thrown in! What’s not to love? [Josh]

Clue 4: “You won’t find the next clue in among the books, rather it’s near the bricks you will need to look. Often Bradley Artily builds a piece of work that is worlds apart, solve this clue and you’ll be nearer the peach that you were at the start.” which after a few attempts and help from the public, led them to Tadley Library.

With 33 minutes to go, they get Clue 5: “Back in time now to the Tudors as we head to Sandy’s home where there will be plenty of land for you to roam. There are no grapes here but do think of the Silvanius ring and you’ll be at the end of this quest but please when you celebrate, don’t sing.” which they quickly solved as the Vine in Basingstoke.

It was a thoroughly enjoyable morning, great team all did our bit and we solve it 22 minutes early! We were on for the record until I mentioned it! Despite loo stop, Katy Perry and Tadley Library, I would do it all again. [Michael]

At 10:38 they found the Peach and completed the Quest, so close to the Leaderboard but with a new Sainsbury Singers record!

Missed it? You can catch up with the programme here: