Stars of the Show! 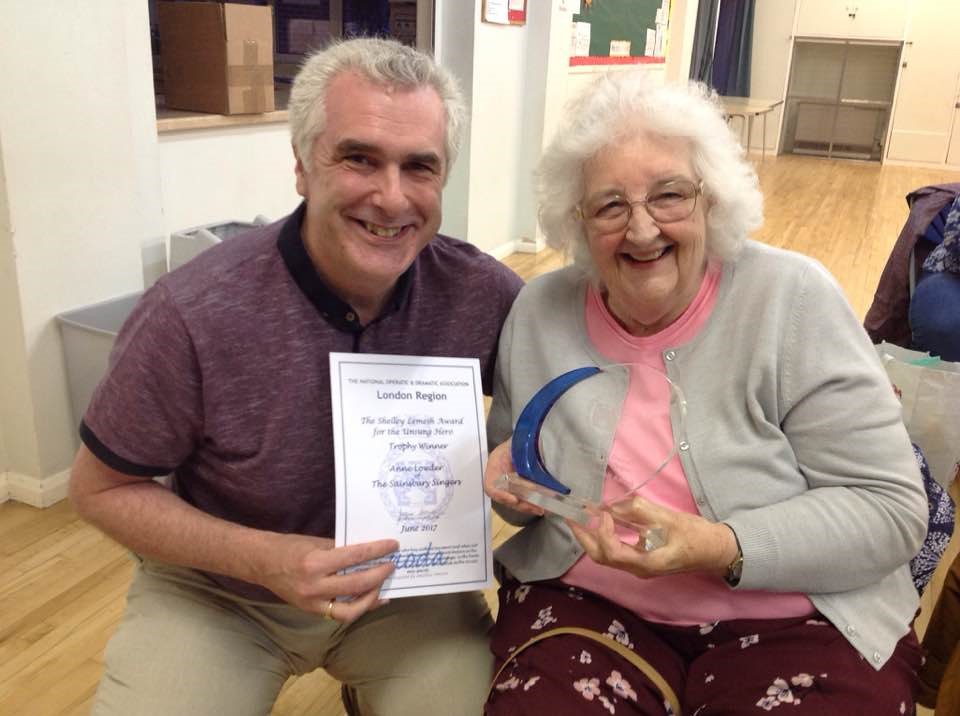 Four members of the Sainsbury Singers attended the NODA London Festival Weekend for the presentation of awards on Sunday 4th June 2017.

It was with much anticipation that four members of Sainsbury Singers attended the NODA London Festival Weekend, for the presentation of awards on Sunday 4th June 2017.

Brian, Wendy, Michael and Denise settled down in their seats in the packed theatre to watch the winning Youth Group 2016 showcasing their talents with a selection of songs from Phantom of the Opera, Miss Saigon and Les Miserables. All the area NODA representatives were introduced to the audience and then the presentations began. Each district was a winner in NODA’s eyes and certificates has been presented to us in our welcome pack which we were asked to bring with us onto the stage at the appropriate presentation.

Achieving 6 District Awards was amazing enough for us but we also won 4 Trophies for being considered the best out of all the London districts in four categories.

The first three awards were nominated by our Region 13 London representative Jet Maskell. Only one production or actor can be nominated for each district so we are indeed honoured to have been selected for three categories and being trophy winners in two of them.

The Hot Mikado is a “hot” updated version of Gilbert and Sullivan’s perennial classic The Mikado, which weaves a hilarious tale where despite life or death stakes, characters still find time to tap their toes and do their fair share of scatting.

“This was such a fun show, with its eclectic genre of music including jazz, gospel and blues. It had been extremeley well cast with excellent acting and singing from principals and chorus.” (NODA review).

Hot Mikado was produced and directed by Wendy Carne with musical direction by Jon Brooks, choreography by Denise Schult and lighting design by Kim Hollamby. Wendy Carne accepted the award.

The Malcom Rose Award for Best Male in a Gilbert & Sullivan 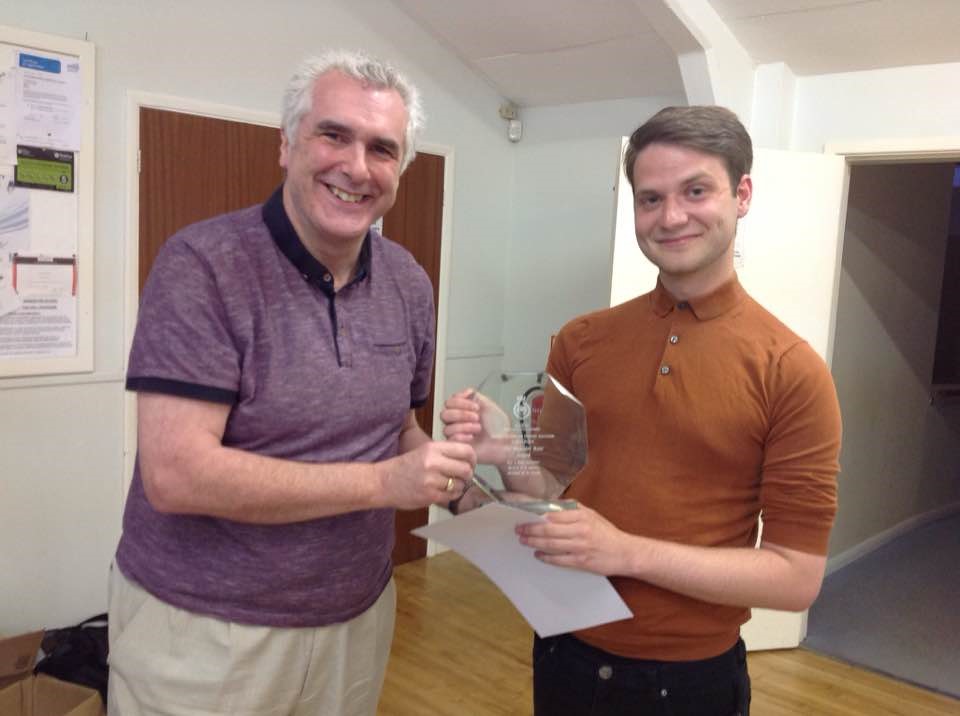 Gareth played Ko-Ko in the Sainsbury Singers 2016 production of Hot Mikado. Michael represented Gareth and accepted the winner’s Trophy on his behalf.

“I was really smitten with this ineffable characterisation. He gambled and cavorted round the acting arena in a most entertaining manner. Visually his facial expressions and body language was transcendent and his interaction with other members of the cast unparalleled.” (NODA Review)

The Malcom Rose Award for Best Female in a Gilbert & Sullivan

District Winner – Lucy Hutson as Pitti-Sing in The Hot Mikado 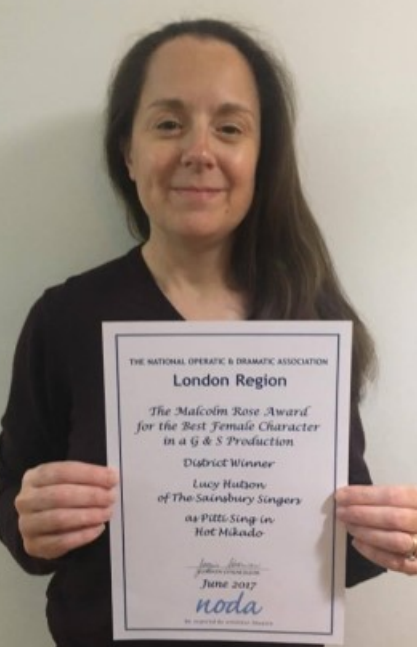 Lucy played Pitti-Sing in the Sainsbury Singers 2016 production of Hot Mikado. She was the District winner and Lucy’s dad represented her at the presentation.

“This was a standout performance by this young lady; she was breathtakingly sublime! Her dialogue and movement was energetic and vivacious. The tone and quality of her voice was captivating and totally suited to the music embellishing her numbers greatly.” (NODA Review)

The Louise English Trophy is for a young person under 30 who has made an outstanding contribution to his/her society in any capacity whatsoever. Denise represented Katie for this award and was delighted to accept the trophy and a notebook on behalf of Katie.

Katie was nominated by the Sainsbury Singers as despite only being a member for 6 years, she has packed a sizeable amount of commitment in that time. Despite major health issues, she has appeared in shows, been production coordinator, stepped up to the Marketing Manager and volunteered to be our Concert Musical Director. All this, and she is only 23!

Michael represented Anne and was delighted to accept the area trophy on her behalf. The award was for Society Unsung Hero and is given to a society member who without payment and when not appearing on stage has made an exceptional contribution in the last year to the production in any capacity.

Anne joined the society 40 years ago and appeared on stage for over 30 of those years. Anne’s majority of work has been behind the scenes as Membership Secretary and Prompt. Anne is at every rehearsal from music practice to floor setting, assisting the actors in line delivery. During show week she sits at the side of the stage, torch in hand, concentrating hard to be ready to deliver that all important forgotten line. She gets on with the job without fuss and is a vital cog in the wheel of the Sainsbury Singers. 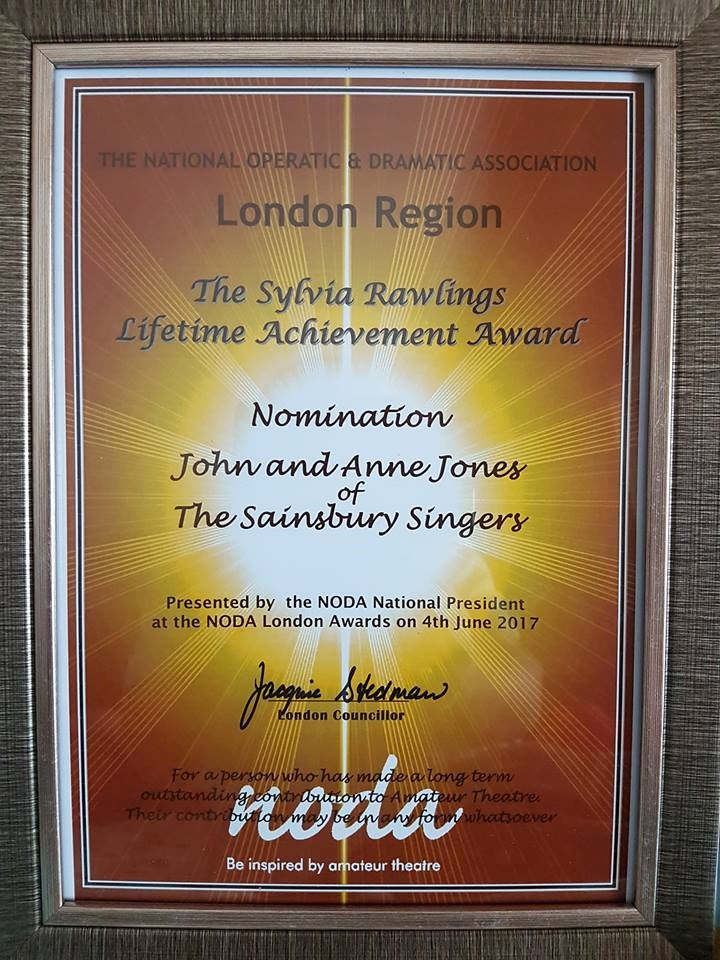 The Sylvia Rawlings award is for a person who has made a long-standing contribution to Amateur Theatre in any form.

Between them, Anne and John have provided the society with more than 100 years of service. They come as a package and despite Anne’s failing health, they stil do much to assist their beloved Sainsbury Singers. They have both appeared on stage, John has been Business Manager and between them they organise and issue all ticket sales for all productions. They are also the Front of House representatives for the society.