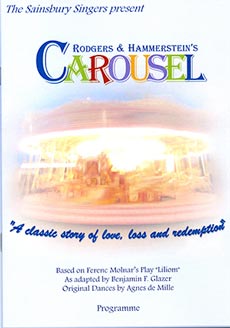 The Sainsbury Singers presented Carousel the Rodgers and Hammerstein musical on 14-17 May 2014 at The Hexagon Theatre, Reading.

First performed in the 1940s and revived many times since to this day, Carousel owes very little to the candy of the fairground and much to a tale of love and tragedy, of wasted opportunity but ultimate redemption. 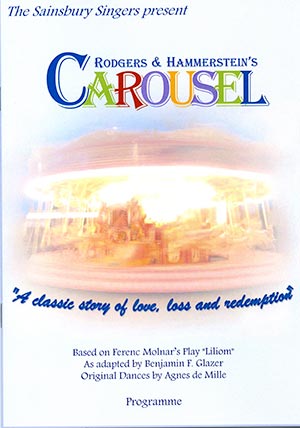 In a Maine coastal village the carnival barker, Billy Bigelow, captivates and marries a naive millworker, Julie Jordan. Billy loses his job just as he learns that Julie is expecting their child. Desperate to provide a decent life for his family, he is coerced into committing a robbery.

Caught in the act and facing the certainty of prison, he takes his own life.

Years later Billy is allowed to return to earth for one day and he encounters the daughter he never knew. She is a lonely, friendless teenager, her father’s reputation as a thief and bully having haunted her throughout her young life.

The show contains Rogers and Hammerstein greats including If I Loved You, June is Bustin’ Out All Over and You’ll Never Walk Alone. In this intepretation producer Wendy Carne created a fresh prologue, setting the scene at the mill before taking the audience through the fairground carousel and into scene 2 without the traditional pause for a change of scenery. In the Act 2 ballet she re-imagined it to focus on Billy’s daughter. Both changes were well received by the audiences.

Carousel marked the emergence of two new leading principals for Sainsbury Singers – Sara El-Hanfy and Stephen Cox, a first leading role for Marek Rakowski and a premier show for a new young star, Rosie Sumner. And it marked the second consecutive production at The Hexagon where scenery was minimised in favour of lighting effects to set the correct atmosphere. 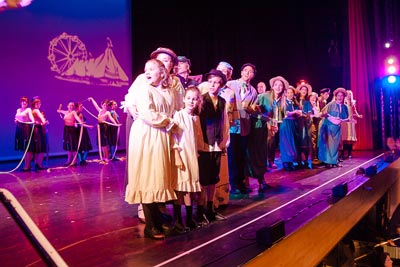 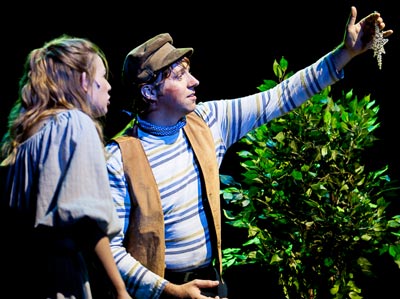 Carnival characters, dancers and inhabitants of a fishing village on the New England coast

Kidz Alive! members in the prologue, ballet and Snow family 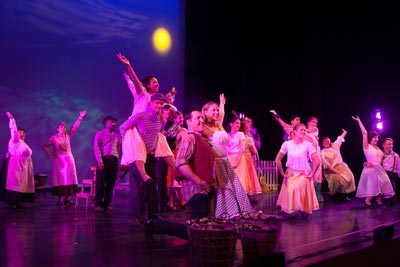 “I want to let you know how much my friends and I enjoyed last night’s performance of Carousel, it brought back memories of our much younger days! The production itself was very good. A most enjoyable evening, thank you. Also, thank you so much for the superb seats!Best wishes also for the rest of the performances.”

“Brilliant show, well done, we all thoroughly enjoyed it.”

“I loved it. Set was great, particularly the carousel. Singing and dancing really well performed. A good evening!”

“It was a fabulous show! Deb you were amazing and Catherine Hannan – I could have never imagined you being a mean person – but you played it superbly – bit scary actually! Sophie was a little star too! Well done ladies and to all the cast – really enjoyable evening!”

“Great show, we thoroughly enjoyed it.”

“We both really enjoyed the show, my wife thought it was your best one yet.”

“Well done to all The Sainsbury Singers for the performance of Carousel last night. Wonderful performances from the principals, amazing chorus numbers, phenomenal lighting, cracking sound and outstanding choreography. Many congratulations to all involved.”

“Just wanted to say we had a fantastic evening and it was Christy’s favourite so far! Really enjoyed the dancing numbers and having the kids was a nice change! Had goosebumps both times you’ll never walk alone was sung.”

Thoroughly enjoyed The Sainsbury Singers production of Carousel last night. Excellent principals and chorus, superb choreography, very effective staging and lighting. Shouldn’t single anybody out – all of the principals were great – but I have to mention Stephen Cox as Billy Bigelow, who really impressed me. The large number of children were extremely well managed, too. On the staging side, I have to mention the magnificent costumes – especially the fairground costumes – and I really liked the carousel. I have grim memories of heaving round a “real” carousel in the last production of Carousel, and the “deconstructed” solution used in the current production is a brilliant compromise.

Thank you for a very enjoyable evening last night. Dear old Carousel! It was ‘fresh’! Really liked the way it was staged. Such a super idea. I loved the Carousel….who made those gorgeous horses?! Isn’t it a shame you only see this scene once ‘cos I thought it was stunning!

Did enjoy the show. Never did like that terrible opening to Carousel but must say Wendy and Denise produced the best ever waltz opening I can ever remember. The singing was very good as was the production and choreography – congratulations all round – we were very pleasantly surprised and happy. Cannot really understand the casting of Gordon and Michael as very heavenly representatives – probably the biggest rogues that could be found. Now there’s good acting for you!