Getting ready for the 125th! 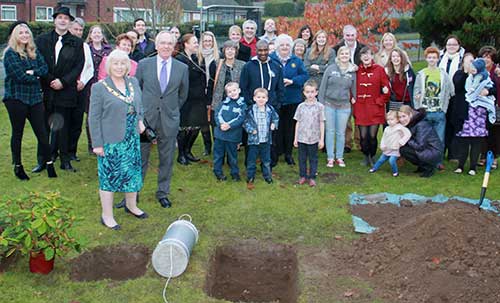 The Sainsbury Singers has celebrated its 75th anniversary year by burying a time capsule in the grounds of the Grange Church, Southcote on 16 November, followed by a tea dance.

The company has been rehearsing at the Grange Church for over 15 years, making it the ideal place to bury the commemorative capsule. Contents of the capsule included programmes and leaflets from two 75th anniversary shows, Jekyll & Hyde and Red Hot and Cole, as well as props, a copy of The Sainsbury Singers production of Beauty and the Beast on DVD and recordings of the society singing.

The The Worshipful the Mayor of Reading, Marian Livingston, attended the ceremony along with Society members and children from the Kidz Alive! theatre group. Afterwards everyone enjoyed tea and cakes followed by a tea dance to learn the paso doble, the cha cha cha and the foxtrot.

On Sunday 17 November the time capsule was blessed during the Grange Church morning service.

Chairman Brian Bretney said: “We’ve had a great twelve months celebrating our 75th anniversary and this final event recognises the dedication and passion of our members while looking forward to the future generation. We’re grateful for the support of the Reading public and hope we can continue to bring musical theatre to the community for another 75 years.”

The Sainsbury Singers is now busy rehearsing for its Christmas Concert at St Peters Church, Caversham on 14 December and its next Hexagon show, Carousel which will take place between 14-17 May 2014.