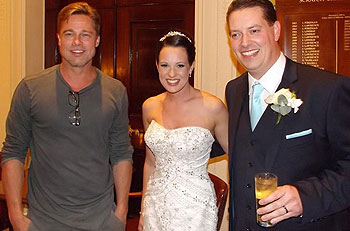 Wedding Belles have been ringing and The Sainsbury Singers are all a flurry with excitement!

Abi was the star of our productions of Beauty & the Beast and Into The Woods. Not only were some of us privileged enough to Be A Guest at her marriage to her very own Prince Charming Daniel Lingwood, but news has travelled to all corners of the Earth that Brad Pitt – no, really, BRAD PITT – put in a guest appearance on their special day.

Newspapers, TV shows, magazines and celebrity tweeters from all over the world have been sharing news of Abi and Daniel’s chance encounter with the Hollywood megastar.

Abi is quoted in The Maidenhead Advertiser, one of the first media outlets to break the story: “My husband said to me Brad Pitt was at the bar and you have got to come with me so he dragged me across the hotel…I thought he was joking.”

Pitt then posed for a photo with the happy couple and that image has now gone global.

Abi is no stranger to playing fairy-tale princesses on stage with us, so what did she think of this encounter with real life Hollywood royalty? “He was really nice.”

Many congratulations Abi and Daniel, with love from all at The Sainsbury Singers. We hope to see you soon at our production of Red Hot & Cole.