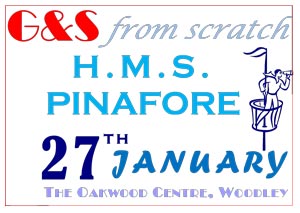 The Sainsburys Singers is marking the start of its 75th anniversary year by performing its first ever show, HMS Pinafore, from scratch in one day.

In 1938 the Society came into being and began rehearsals for HMS Pinafore which it then performed at the Palmer Hall in West Street, Reading, Berkshire, under the direction of Frank Sainsbury. This time around we’ll be rehearsing and performing this popular Gilbert & Sullivan show within one day, from scratch, at the Oakwood Centre in Woodley, Reading on Sunday 27 January. The MD will be Judith Creighton.

Tickets are £8 for the evening performance and this event will be open to anyone to come along and watch, or join in with the chorus singing. For those who would like to sing, all you need to bring in the afternoon is to obtain a vocal score, which you should be able to borrow,  or buy cheaply online. Unless there is a sell-out, the chorus will be part of the audience with their families and will only need to stand when they sing.

Details of the day

Our principals, a mix of current and former members, are: