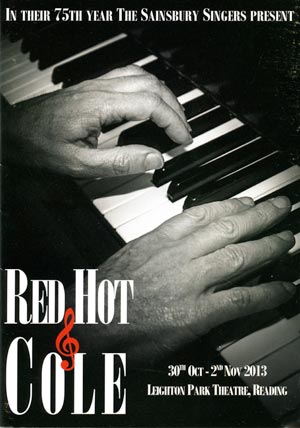 The Sainsbury Singers is pleased to announce that its Autumn 2013 musical is Red Hot & Cole, a show that celebrates the rhymes and unforgettable melodies of the great American songwriter, Cole Porter.

The two-act musical takes the audience on a journey through Cole’s life, from early beginnings, via adventures in Venice and France before superstardom on Broadway and in Hollywood. How better to tell the story than via 33 of his most popular songs.

Music and lyrics are by Cole Porter and the book by James Bianchi, Muriel McAuley and Randy Strawderman. Red Hote & Cole was conceived by Randy Strawderman and musical concepts and arrangements are by Dougee Zeno

The Sainsbury Singers’ presentation of Red Hot & Cole will be staged at Leighton Park School, Reading, Berkshire on 30 October-2 November 2013, the society’s third year of performing in the school’s theatre. It will be staged in the semi-round and the moment you step into the theatre you will be close to the joys and pains of Cole’s extraordinary life and work.

Make a date to join us there, take advantage of free car parking and a bar that will be open during the show and afterwards and buy your Red Hot & Cole tickets online at TicketSource.

In order of appearance: