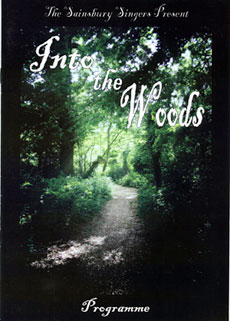 With music and lyrics by Stephen Sondheim and book by James Lapine, Into The Woods premiered on Broadway in 1987 and in the West End in 1990. 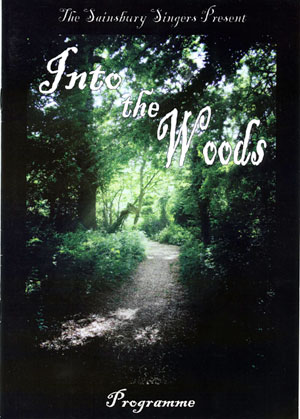 The musical takes familar nursery tales and unveils a darker, interwoven story featuring a young maiden, a sad young lad and a childless baker with his wife.  Joined by the deliciously plump Red Ridinghood and the old, ugly Witch next door, all the characters want and wish for more in their lives. Heading off into the woods in search of their various desires, they encounter wolves, spirits and love-torn Princes. Although they may find their happy ever-after, nobody leaves the woods unchanged and all actions have their consequences. 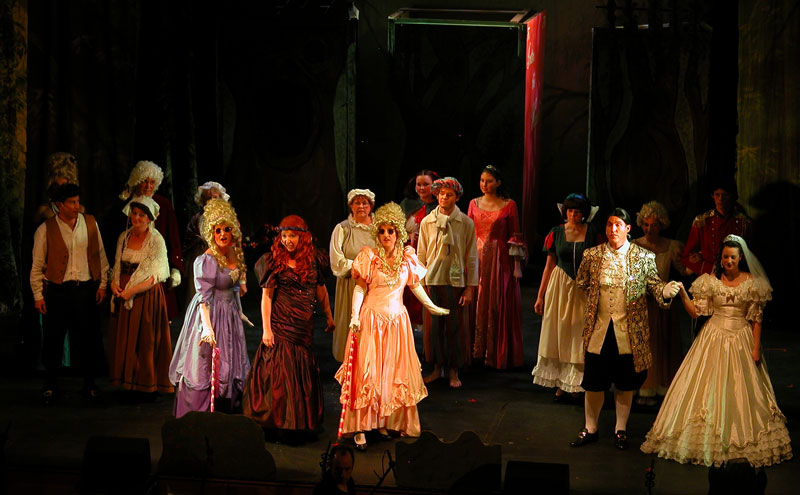 Chorus of Villagers, Footmen, Maids, Guests at the Ball and Birds

The Into The Woods Band 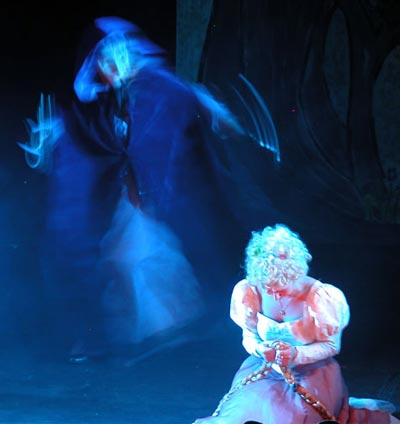 IT’S panto time. Oh no it isn’t! You could have been forgiven for thinking that it was-already that time of the year when the Sainsbury Singers performed Into The Woods with lyrics by James Lapine and music by Stephen Sondheim at Leighton Park School.

Into The Woods takes characters from a number of Grimms’ fairy tales and amalgamates them into a pretty incredible story, but one that allows music from Sondheim to entertain. So we see Cinderella, Little Red Riding Hood, Jack and the beanstalk and Rapunzel all featured in this rather dark tale. It’s far too complicated a story to relate here but safe to say that (almost) everyone lived happily ever after.

This is not an easy show to produce. There are many scene changes. Now that the Sainsbury Singers have had to move away from the Hexagon for some of their shows and the stage at Leighton Park School is much smaller than the Hexagon, it is more difficult to accommodate multiple sets. Sondheim’s music is also very challenging and there are very few chorus numbers which puts pressure on to the principals.

But the Sainsbury Singers always rise to a challenge and this week was no exception. They had sensibly deployed the extended wings of the stage and reduced the orchestra to keyboards and percussion. They had employed radio mics to ensure that there was a correct balance between the singing and music. It didn’t work out completely and there were some difficulties, with the band prevailing in many cases.

The characters are too many to mention but there were many that were able to do justice to Sondheim. Emma Reeves (Little Red Riding Hood) was particularly skilled in the syncopated speech and lyrics. Fiona Wilson (Jack’s Mother), Michael Stebbings (Jack) and Abi Kirkwood (Cinderella) were also able to provide high-quality singing.

I felt that the use of masks for the Wolf (Rob Latimer) and the Witch (Helen Long) masked the Sound and when the witch turned back into the former beauty, Helen was able to make a much better sound.

The band, led by Michael Sharman, was excellent if a little loud for the venue. It brought out the best in Sondheim’s music.

Given the new circumstances that the Sainsbury Singers find themselves in, and the difficult piece that they had chosen, I think that the performance given was really commendable.
JE 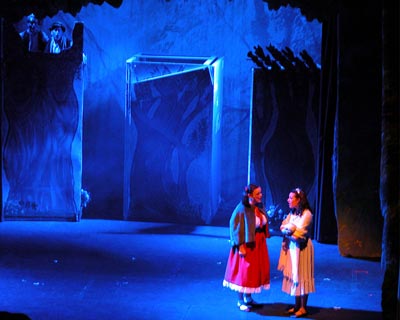 A musical based on characters from Fairy Stories seems an ideal choice for some light theatrical entertainment until Stephen Sondheim’s name is noticed on the credit list! Immediately one becomes aware something much deeper will emerge!

The story line cleverly interweaves the tales of Cinderella, Jack and the Beanstalk, Little Red Riding Hood and Rapunzel into the lives of the Baker and his Wife (Dan Groves and !Lesley Vought) and their evil neighbour the Witch (Helen Long) who sets them the task of retrieving four articles in order to quash the evil spell that prevents them having a family – a golden slipper, a white cow, a red cloak and a golden lock of hair. Simple tasks on the outside, but things change when all the characters find themselves in the woods!

Chris Goodchild narrated the story until he became too involved in things and was trampled by the Giant’s wife as fantasy became reality. I was particularly taken by the characterisation of Michael Stebbings (Jack) and Chris Reeves ensured his portrayal as Cinderella’ s Prince contrasted nicely with that of Sean Faulkner (Rapunzel’s Prince) whilst the other principal characters all gave good representations of their roles. Of course, being Sondheim, the tunes were less harmonious that most musicals and left very little for the members of the chorus to get their teeth into.

Under Kim Antell’s direction, the dark overtones of the storyline and its underlying moral were readily appreciated by ‘children of all ages, despite the musical accompaniment sometimes overpowering the singers. 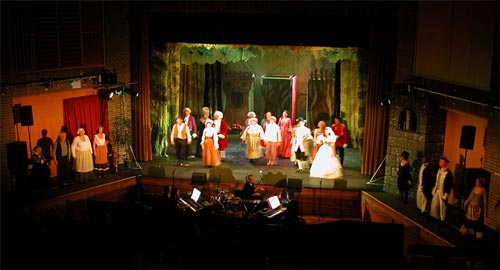 On Saturday 22nd October 2011 I was invited to review the Sainsbury Singers latest production of Stephen Sondheim’s “Into The Woods” presented at the Leighton Park School Theatre in Reading. This was a new venue for the ‘Singers’ and which must have caused some logistical problems. That said the technicians surmounted any problems and presented a reasonable production within the confines of the stage area. This was an ideal vehicle forthe younger members in the audience, I had a young lady of 7 or 8 years of age, who was sat in front of me and she sat totally entranced throughout the whole performance.

I must admit that Sondheim is not one of my favourite composers as I feel he makes the music unnecessarily difficult with few, if any memorable numbers. That said I felt that the ‘Singers’ did the difficult music full justice in the many numbers. This production gives a lot of the members the chance to play a role, in fact some 20 characters all told. Unfortunately it is impossible for me to report on each one individually so I hope you will forgive me for combining you all together as each and every one gave a good performance.

Chris Goodchild – (NARRATOR) – Chris did an excellent job as the ‘Narrator’ linking the various scenes together. His diction could not be faulted and every word could be heard so that one was fully aware what was to transpire on stage and which gave a good flow to the story line.

Choreographic routines looked well rehearsed with precise movement, but what impressed me the most was the singing. As I have said, Sondheim is not the easiest music to sing but you an had rehearsed this music well and it showed – Congratulations to you all.

Chorus of Villagers, Footmen, Maids, Guests at the Ball & Birds – This chorus gave trojan service in this production. They sang the difficult music well with a fine balance of voices and with good entries and projection. All developed their own individual characters and were totally involved with the action on stage.

Kim Antell – (PRODUCER & CHOREOGRAPHER) – I would imagine that this show was quite a challenge particularly as it was staged in a new venue. I felt that you brought out all of the right characterisations in the numerous roles, although they were ‘Fairy Tale’ characters, they were believable. The positioning for the full stage and also the inserts was well positioned and at no time did the proceedings look cramped. The choreographic movements came across very well and fitted the action on stage. One small point. I felt that the ‘Giant’ failed to have the necessary impact, sound effects were trerrific but the projection of the ‘Giant’s’ outline failed to have the necessary impact, not helped by a female voice – Apart from that small point – Congratulations on presenting an enjoyable show.

Michael Sharman – (MUSICAL DIRECTOR) – It was good to see Michael back as musical director, you have been missed. Any of Sondheim’s music is a challenge which you certainly rose too. All principals and chorus had been well rehearsed in the many musical numbers with a good balance of voices in the concerted numbers. Diction and projection was also good so that all the words could be heard. Although there were only two keyboards and percussion in the band it certainly made a good sound and blended well with the singers – Well done.

Stage Manager & Crew – This was a well managed stage considering that it was a new venue and having to get to grips with a new stage, and which required seven complicated scene changes, most of which was completed swiftly and silently.

Lighting Design & Operation – A well designed lighting plot which illuminated the various inserts without too much spilt light and was very effective. On the night of my visit cues were well picked up.

Sound – The sound was effective so that the majority of words could be heard at the back of the auditorium without distortion. I was also impressed with the sound effects, particularly the ‘Giants’ footsteps, all well cued.

Wardrobe – The Wardrobe Department, (the unsung heroes of many productions) had sourced an enormous number of costumes with all of them pertinent to the many and varied nursery rhyme characters – No mean feat – Congratulations.

Props – A good selection of props. I particularly liked the ‘mobile cow’ and the ‘flying birds’.

Make-up – The make-up had been well devised and applied showing the various pantomime and nursery rhyme characters which must have been a considerable challenge, and all standing up well under the stage lights. Wigs looked authentic and well dressed – Well Done.

Set Design & Construction – An interesting set design, constructed in house. It had been well built and with the use of reversable flats ensured swift scene changes and depicted the various locations well. The backcloths were all relevant to the various scenes. The decor had also been well devised andapplied.

Programme – An attractive programme of the right size. It contained a wealth of information all printed on good quality paper. Good cast photographs with interesting details, air contained in an atmospheric cover. How nice to see a programme these days with only two adverts throughout the programme.

Front of House – Front of House staff were welcoming to their audience which was no easy task as the theatre did not have a proper Foyer resulting in considerable congestion.

Thank you for inviting me to review this, your latest production of “Into The Woods” and for your excellent hospitality. I look forward to your next presentation “Thoroughly Modem Millie” in May 2012 and wish you all success and larger audiences with it.