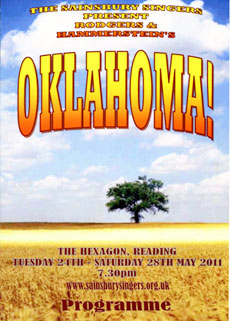 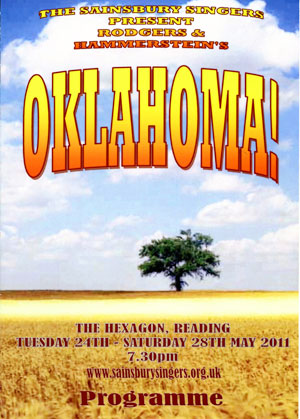 Oklahoma! was the first musical wriiten by composer Richard Rodgers and librettist Oscar Hammerstein II. The musical is based on Lynn Riggs’ 1931 play, Green Grow the Lilacs. Set in  Oklahoma Territory outside the town of Claremore in 1906 it tells the story of cowboy Curly McLain and his romance with farm girl Laurey Williams. A secondary romance concerns cowboy Will Parker and his flirtacious fiancée, Ado Annie, a friend of Laurey’s.

Oh what a lovely show

WITH all the cuts being experienced in the arts world one wonders how some theatres and societies survive.

The Sainsbury Singers is now restricted to one performance a year at Reading’s Hexagon. Last week they put on one of the all-time favourites; Rodgers and Hammerstein’s Oklahoma, a musical full of lovely tunes which also contains dark themes.

Sainsbury Singers have a new musical directing team (Michael Stebbings and Fiona Wilson), a new producer (Kim Antell) and lots of new blood. It’s also interesting to see how this ‘family’ society has spawned new stars — Stephen Cox (Jud) takes over the part that his dad Peter played last time, and Sean Faulkner (Curly) follows in the traditions of his dad Chris.

I’ve written before about the Hexagon being a difficult venue to play because of the sheer size of the stage and the difficult acoustics. Sadly the gremlins were at work on the first night and we lost some of the principals’ voices for a short period in the second half.

The choreography was a little tame at times, although the fight scenes were well done and realistic. Memorable scenes? The most powerful was that set in the smoke house with Curly and Jud, particularly Jud’s Lonely Room which was sung with great force and passion by Stephen Cox.

There aren’t too many choruses in Oklahoma but Oh What a Beautiful Morning, and Oklahoma are potential show stoppers. The Sainsbury Singers chorus proved that fundamentally they are an excellent singing group.