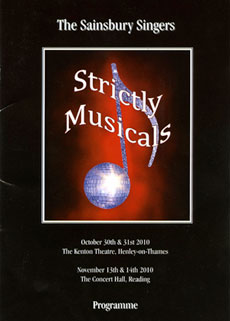 The Sainsbury Singers presented Strictly Musicals on 30-31 October 2010 at The Kenton Theatre, Henley-on-Thames and The Concert Hall, Reading on 13-14 November 2010. 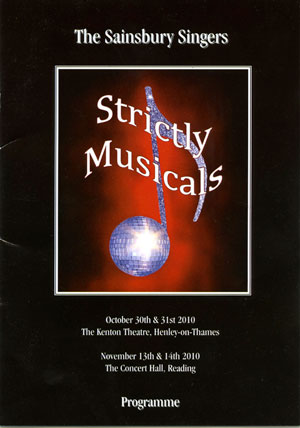 It was the first time that the Society had staged a show of this nature. Unlike a usual production there was no hireable score, script, band parts, costumes, prop or set.

THE Sainsbury Singers were at the Kenton Theatre last Saturday and Sunday to give a performance of their musical extravaganza Strictly Musicals. The show was packed with songs from West End and Broadway hits, including Phantom Of The Opera and Chicago.

This amateur society was formed as long ago as 1938, by Frank Sainsbury, a local man born in Reading, who was encouraged to sing as a boy to aid his recovery from double pneumonia.

This latest stage production took a selection of the best songs from well-known musicals to produce an enjoyable and varied programme, giving an opportunity for these singers to showcase their talents. A total of 27 cast members sing solos, duets and group numbers.

The programme comprised 18 arrangements, divided into two acts, encompassing older favourites such as There is Nothin’ Like A Dame from South Pacific and Tonight from West Side Story, through to modern classics such as All That Jazz from Chicago and You Can’t Stop The Beat from Hairspray.

If you missed this enjoyable evening of emotion and extravagance, you can catch it again at the Concert Hall, Reading on Saturday, November 13 and Sunday, November 14.

On Saturday 13th November 2010, I was invited to review the Sainsbury Singers latest production entitled Strictly Musicals at The Concert Hall in Reading and submit a short report. The programme consisted of a wonderful selection of songs from current musicals ranging from ‘The Lion King’, ‘Blood Brothers’ to ‘Mamma Mia’ and concluding with the number ‘One Day More’ from ‘Les Misérables’, giving a fitting climax to the evening’s entertainment.

The staging was good with the performers making attractive pictures, enhanced by wearing identical outfits. Certain numbers were augmented by choreographic routines which had been well thought out and performed. I did feel that the continuity of the show was spoilt by the company leaving the stage when solos were performed and then re-entering which caused long pauses when nothing happened, this could have been avoided if members had retired to the choir stalls at the rear of the stage.

The Strictly Musicals Band consisted of seven excellent musicians under the control of Fiona Wilson. Their accompaniment was excellent, being an integral part of the show, never over-shadowing the performers.

The lighting design by Kim Hollamby was atmospheric and well controlled, as were the two follow spots.

The programme was attractive and well laid out with all the necessary information contained within its cover.

Thank you for inviting me to review your concert and for your hospitality. May I wish you continued success with your next production, Oklahoma!