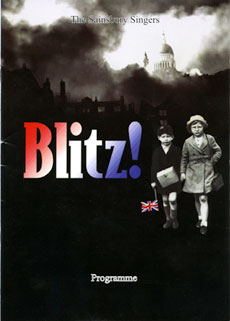 The Sainsbury Singers presented Blitz! on 5-9 May 2009 at The Hexagon Theatre, Reading.

Lionel Bart followed the success of Oliver! with this musical which was based upon his experiences as a child in the East End during the blitz. He wanted to remind audiences of the spirit that kept people going through such hard times – how they pulled together and rallied around when their friends and neighbours suffered from the effects of constant bombings. 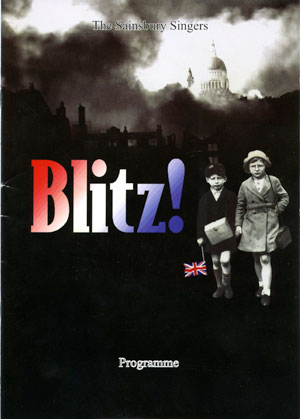 One unusual addition to The Sainsbury Singers cast was Vera Lynn, whose voice was heard in the number ‘The Day After Tomorrow’. 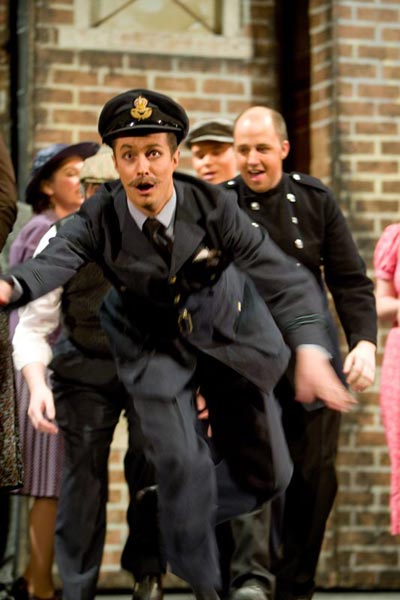 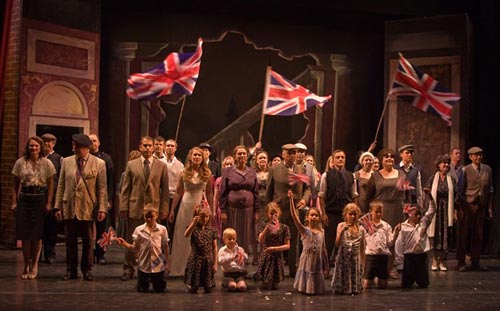 I’ve been to see a fair few musicals over the years, but occasionally one turns up which I’ve never seen before. Blitz was new to me and was performed at the Hexagon, Reading by the Sainsbury Singers last week.

It was a follow-on composition by Lionel Bart from his successful Oliver, and it probably fell into its shadow and wasn’t a huge hit. It tells of the stories of London folk in 1940 when they were subjected to constant bombings, lost their homes, friends and had their children evacuated. It also tells of the heroes and the villains who worked their way through the war.

It’s a really busy musical with lots of chorus, strong individual lead and cameo parts and although requires lots of scene changing, its perfectly possible to perform on an amateur stage.

I look forward to two things with the Sainsbury Singers; good strong chorus work and interesting choreography. We got both in this show and although the cast numbers are too large to do any particularly ambitious movements, it was very fitting for this play. The chorus sang As long as this is England, The Day after Tomorrow, Petticoat Lane and Is this gonna be a Wedding really well. It’s not just about the volume but the quality, tuning and genuine enthusiasm which really spreads to the audience and makes it enjoyable. Petticoat Lane is of course a really good opportunity to have lots of brightly coloured stalls in a busy market and it was a really good scene.

Mrs. Blitztein (Tricia Goodchild) was excellent. She has a strong voice and character and she was able to be a very bossy lady on the stage. Carol (Lorraine Meechan) and Harry (Paul Stoneley), the two adult children were also convincing as their characters. Geogie Locke (Dan Groves) provided the love interest and worked well with Carol. But there were so many good cameo roles which really made this a truly ensemble piece.

It was a production that moved quickly, despite the huge sets. There is, however, a huge fear (here and elsewhere) of not showing stage hands moving sets in the dark which gives the audience long periods of blackouts. I much prefer the emphasis now on continuous movement with perhaps simpler sets and an ability to focus on one part of the stage whilst the other part is being changed.

Wendy Carne produced a really cracking show and I am really looking forward to Chess in October which I’m sure will be another fine production. 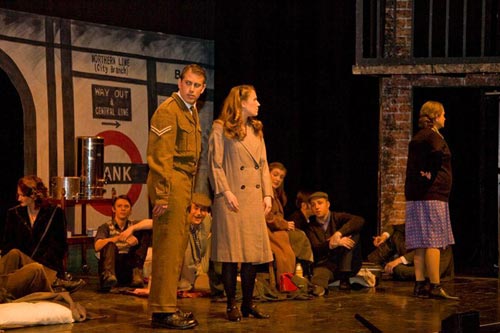 The Sainsbury Singers begin their 2009 with a staging of Lionel Bart’s follow up to Oliver!, Blitz! – a tale of typical East End families during the Second World War. The Montagues and Capulets of the show are a Jewish family, headed by an indomitable widowed matriarch, the Blitzsteins and the Lockes, a Cockney family.

Mr Locke runs a fruit and veg stall, while Mrs Blitzstein sells pickled herring on her barrow. They don’t get on and vocally express their animosity in song and dialogue, but, naturally enough, the next generation has fallen in love and there’s nothing much they can do about it.

Much of the play is filled with the concerns and attitudes of a stereotypical Jewish Mother – an archetype from everyone’s nightmares, surely.

Not only has her daughter fallen in love with a boy, but her son has deserted from the Army on the eve of his embarkation for North Africa, and there’s no one to eat the cake she’s baked for him – ach, the shame!

In this role Tricia Goodchild is very good indeed – singing strongly, conveying the depth of character and emotion well, and being both moving and very funny.

Her opposite half, Alfred Locke – an offensive misery of a man – is much less likable, but still well played by familiar Sainsbury Singers face Peter Cox.

He hangs around with a fellow First World War veteran, the tale telling Ernie Nearmiss, with whom he can swap bigotry and reminiscences in equal measure.

Although it’s impossible he’d remember an East End without immigrants, since to find that would be to travel so far back in history as to be almost mythical, they still find the company of so many un-English people disturbing and threatening – even though as he bawls out Mrs Blitzstein one can’t help but think what is happening – and has been going on systematically for the previous decade – 400 miles to the east.

Naturally dreadful things happen – people are wounded, houses are lost, lovers are parted – and naturally enough things come together in the end – this is, after all, more a comedy than a tragedy, and a wedding is followed by a reconciliation of sorts between the two antagonists.

Along the way there are plenty of songs – some of which are marred by the usual technical difficulties amateur groups always encounter in The Hexagon – inadequate attention to the amplification of singers – individual microphones being turned on after singers have begun, and singers with solo lines not being miked at all attempting to be heard at the same level as those who are. But most of the songs come across well and the band is particularly good – with a lovely brass and wind section which gave it that authentic big band sound of the time.

The sets were also very nice – a trio of movable brick towers that doubled as streets, houses, alleys, and provide a clear sense of moving from one location to another, simply and effectively.

The last thing to mention is Lionel Bart’s apparent fearlessness of working with children. There are a couple of scenes for the kids’ ensemble – one as they’re waiting on the station platform to be evacuated and another when they’ve come back to London and are playing playground games – which serve as light relief, giving a pause in the narrative and probably allowing costume changes and a quick cigarette backstage (not that there’s any smoking allowed backstage, of course).

And the kids are very good and well received (even after subtracting the obligatory ‘ahs’ and ‘oohs’ and ‘oh, how sweet’ that the simple appearance of little people on stage brings to an audience filled with their grandparents).

All round, not a bad production at all.