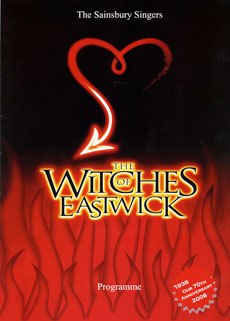 The Sainsbury Singers presented The Witches of Eastwick on 29 October-1 November 2008 at The Hexagon Theatre, Reading. 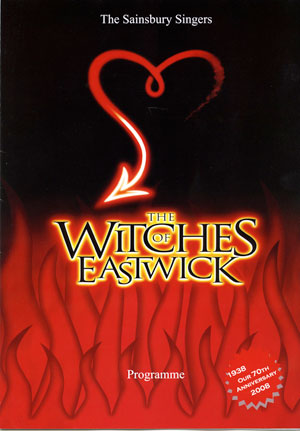 Based upon the novel of the same name by John Updike, this musical is based around the lives of three ‘witches’ who are bored with their lives in the town of Eastwick. The arrival of the devil-like Darryl Van Horne at first excites the women, but events spiral out of control.

The Sainsbury Singers performed this show just eight years after Dana P Rowe (music) and John Dempsey (lyrics and book) saw The Witches of Eastwick performed for the first time in the West End. 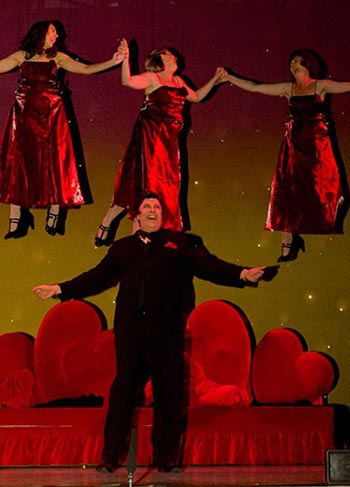 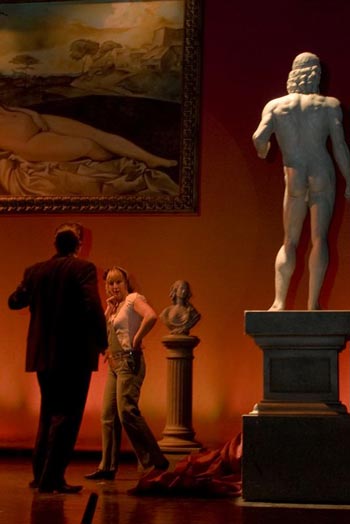 The first thing to say is that Jack Nicholson is never, ever going to be an easy man to follow, but Nigel Wilson, playing the devilishly devilish Darryl Van Horne, makes a jolly good fist of having a fine stab at it in this musical version of the film version of John Updike’s novel, The Witches Of Eastwick.

Three magically vital inhabitants of the small Rhode Island town of Eastwick summon up the man of their dreams after their own love affairs are less than perfect, and suddenly into the midst of this small town, where everyone knows everyone and everyone’s business, Van Horne arrives to shake things up.

He begins by having simultaneous affairs with each of the three ‘witches’ – until they fall into a mutual ménage a quatre – and encouraging licentiousness among the other inhabitants, which is thoroughly disapproved of and gossiped about by the few remaining prudes and puritans.

Eventually the fun is over and someone dies and the three women turn their backs on Van Horne and he runs off with a much younger woman – partly just to spite them and partly for his own procreative and hedonistic ends.

They more or less win in the end and Van Horne scurries away with his pointed tail between his legs from a delightful on-stage collapsing church.

Along the way there are plenty of catchy songs, some lovely looking sets (with slick changes), some very funny set pieces, good acting, good singing and a winsome little girl who pops up from time to time to sing a sort of unlikely commentary on the goings on, but whose sole real purpose is to be shouted at and scared off-stage.

This seems a beautifully fitting comment on the role of children in musicals.

The three leading ladies all give great performances, and are all different enough – in looks, in style, in register, not just in the characters they’re playing – to complement one another easily and provide and lovely counterpoint, even if sculptress Alexandra Spofford (Helen Eggleton) does start the show dressed like Meryl Streep in Mamma Mia, which makes one worry all the way through the opening sections whether she’s going to be performing acrobatic star jumps a la Leroy from The Kids From Fame.

Fortunately most of the dancing in the show is quiet, understated and effective – if it’s never quite Bob Fosse, it never quite needs to be.

All in all this is a good show from The Sainsbury Singers who continue to brighten the Hexagon twice a year with their, not always predictable, choice of shows – long may they continue. 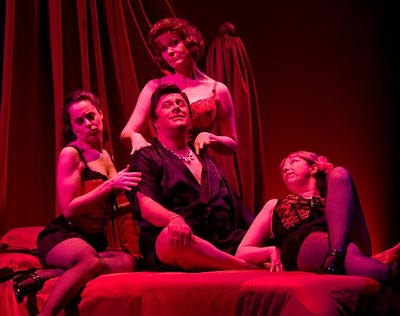 The Sainsbury Singers presented this modern musical last week… and a devilishly good job they made of it, too.

The sexually frustrated ladies of the title were in the excellent hands of Helen Eggleton (the sculptor Alexandra), Lucy Hutson (Jane, the cellist) and Lesley Vought (bookworm Sukie) whose strong delivery of their individual vocal numbers and superb blending in their shared trios were highlights of the show.

Nigel Wilson brought all his outstanding performing skills to his role of Darryl Van Horne, the devil incarnate, who stylishly managed to charm all three to share his bed!

While the musical numbers are, by and large, instantly forgettable, their lively interpretations by the spirited chorus of townsfolk, especially the showstoppers Dirty Laundry and Dance With the Devil attested to the interpretive skill of the society’s new musical director Anthony Wythe.

Director Christopher Boott can be very proud of the result while remaining slightly disappointed that larger audiences were not attracted to this dynamic production.