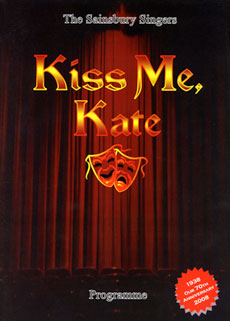 The Sainsbury Singers presented Kiss Me Kate on 22-26 April 2008 at The Hexagon Theatre, Reading.

This tale of behind-the-scenes feauding in a production of The Taming of the Shrew was Cole Porter’s most successful show. For this production The Sainsbury Singers performed the 1999 revised version, which features a number of changes including the addition of a song used in the 1953 movie version, This Moment On. 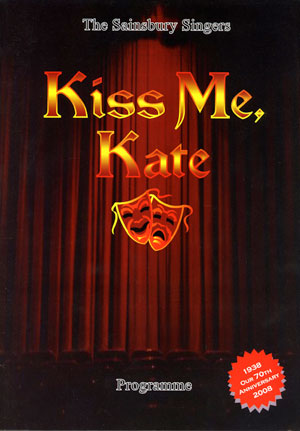 The Ensemble – Cast of Taming of the Shrew 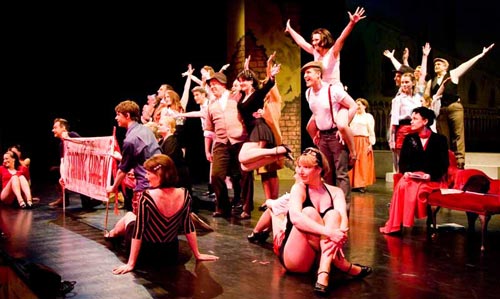 The first show in the 70th Anniversary Year of the Sainsbury Singers, performed at The Hexagon, Reading, is a gem. Kiss Me Kate, with music and lyrics by Cole Porter is a tale within a tale; set in America in the 1940s it outlines the relationships of a group of travelling actors performing a musical version of the well-known Shakespearian story, The Taming of the Shrew.

A single, deep, warm voice sang out the first notes of Another Op’nin, Another Show and instantly captured the audience’ attention — the performance had begun. The singing of Nigel Wilson as Pops, the Stage Doorman, set the pace and with the gradual addition of the ensemble and Hattie, Lilli Vanessi’s Dresser, powerfully played by Jessamy Vincent, the show began in a lively fashion.

Rob Latimer and Emma Reeves as actor/manager Fred Graham and his leading lady (and former wife) Lilli Vanessi were superb. The love—hate relationship of their Shakespearian characters Petruchio and Kate was cleverly mimicked in their onstage personas; their body language, fierce looks and fiery performances were excellent — to say nothing of the deftness with which they hurled and caught their props! Rob’s rendition of Where is the Life That Late I Led? was both poignant and boisterous; whilst Emma’s I Hate Men was delivered forcefully and with great humour.

Lorraine Meechan and Paul Stoneley in the roles of Lois Lane and Bill Calhoun, the Shakespearian Bianca and Lucentio, brought liveliness and enthusiasm to their characters. Lorraine Meechan was able to show both the ‘dumb blonde’, empty-headedness of night-club singer Lois, as well as the raunchiness of Bianca. Her interpretation of Always True to You in My Fashion was particularly memorable. As love-lorn Bill Calhoun, the confirmed gambler who gazes adoringly at Lois, Paul Stoneley was totally believable; his song, Bianca, was delivered with great sensitivity, (although Cole Porter’s lyrics are perhaps a little ‘un-PC’ for today!)

With all stage shows there is always one segment which remains with the audience as they leave the theatre — this show was no exception; the song Brush Up Your Shakespeare was a real show-stopper. Not only are the lyrics exceptional, clever and extremely funny but the performances by the two henchmen, played by Peter and Stephen Cox were outstanding. Their humour, delivery and timing were first- class.

The roles of Bianca’s suitors and other numerous small, cameo parts were well executed. The ensemble performers with the Sainsburys can always be relied upon to provide excellent singing and their latest production, Kiss Me Kate effortlessly maintains the standards audiences expect of them; however as the show was set in the 1940s, an era of both song and dance, it would have been enjoyable to have seen more full cast choreography on stage.

Under the baton of Musical Director Michael Sharman, the twenty-two piece orchestra was superb — it was a great disappointment when the show ended. Director Wendy Came and her production and backstage teams are to be congratulated for “Another Op’nIn of An Outstanding Show” 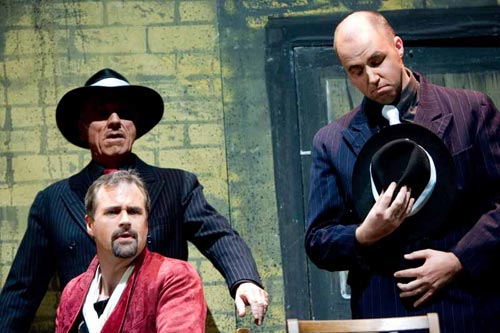 The love/hate relationship between theatrical impresario Fred Graham (Rob Latimer) and his ex-wife Lilli Vanessi (Emma Reeves), both in their private lives and stage roles, was well- conveyed and we were left in no doubt of the feelings Bill Calhoun/Lucentio (Paul Stonley) had for his flighty girlfriend Lois Lane/Bianca (Lorraine Meechan), experiencing her first venture in the legitimate theatre. I was also impressed by the two other suitors, Gremio (Chris Faulkner) and Hortensio (Sean Faulkner) as they pleaded with Baptista (Michael Schult) for his daughter Bianca’s hand.

Peter Cox and Stephen Cox extracted every last drop of humour from their roles as the two naïve hit men, stealing the show with their enforced drag act!

Making his final appearance with the company, Michael Sharman (Musical Director) skilfully led both cast and orchestra through the witty musical arrangements although, unfortunately, over-amplification tended to distort the final output. 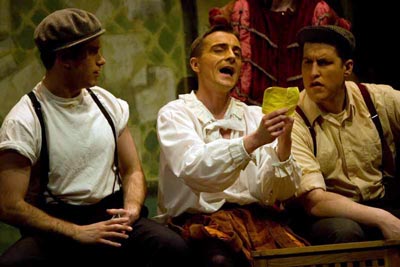 If there’s one thing Cole Porter could be trusted to do, that was to write great tune after great tune and, from the very outset, Kiss Me, Kate is filled with them.

The show opens with what is in effect an on-stage overture, Another Opening Another Show, in which we’re introduced to the theatre company whose show within the show is the story of the show we’re watching.

The show that’s being staged is Shakespeare’s Taming Of The Shrew, from where the title of Porter’s show comes.

The back stage and off -stage antics – involving a divorced couple who are, perhaps, still in love; young lovers, one of whom the producer is trying to seduce and the other of whom has trouble with gambling debts; a pair of hoodlums come to keep an eye on that debt, who mistakenly follow the wrong man; and traditionally misdelivered love tokens – reverberate through the performance of The Shrew leading to ad-libbing and comic uncertainty as to whether the play will last to the end of the night, let alone the end of the run.

The Sainsbury Singers have a fine range of sets and backdrops here, even if their dressing rooms wobble worse than a Blue Peter toy.

The costumes include some beautiful period dresses during the play, and not too many large pantaloons and tights – which, when Shakespeare is involved, is always something of a relief.

Rob Latimer and Emma Reeves in the lead roles have both good strong voices and carry across their various vicissitudes well, and it’s really in their, and some other, solo songs that the show comes across at its best.

Songs such as So In Love and I Hate Men are wonderful vehicles for the sentimental and the spitefully vituperative respectively, and give Reeves a nice range of emotion to play, which she seems to enjoy.

The other parts are played uniformly well tonight, and even the ensemble pieces, such as the Act Two opener, It’s Too Darn Hot are performed with a real vim, that shows Porter’s music to be just as brilliant as it is.

The only criticism to place at the feet of the author would be that one or two trick endings and reprises are probably enough for a show – but he does it time and again – sending the character off to what should be tumultuous encore-inducing applause (which with the modest audience in The Hexagon can never reach the Broadway heights) only to come back on with another surprise verse and chorus.

And although the plot wraps up quickly and almost inexplicably neatly, we know that it’s a flimsy excuse for Porter to write some more hits and the book is secondary to that concern.

At the end of the night the songs are there – you’ll be arguing over which one to hum on the way home – and the Sainsbury Singers package them and deliver them with the humour, the romance, the verve and the joy that they deserve. 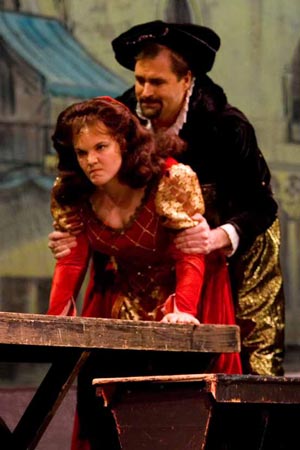 This was another good production by The Sainsbury Singers but not perhaps quite up to the standard of their most recent shows – somehow it lacked their special sparkle. However there were some excellent moments and performances.

The plot tells of a touring company presenting ‘The Taming of the Shrew’ with the actor/manager and his ex wife playing Petruchio and Katharine, whose tempestuous relationship off-stage echoes that in the play.

Cole Porter’s music is fantastic and his lyrics are clever and witty.

As always the male chorus brought the place to life and again as usual, the choreography was understated but immaculately executed and the costumes were excellent – I’ve never seen so many pairs of camiknickers!

The scene changes were mostly slick but when they were not covered by music one was suddenly brought back to reality which was a pity.

I particularly enjoyed ‘Always True to you Darling in my Fashion’ (Lois) and ‘Bianca’, beautifully sung by Paul Stoneley.