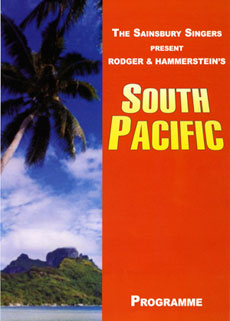 The Sainsbury Singers presented South Pacific on 24-28 April 2007 at The Hexagon Theatre, Reading.

South Pacific was adapted from the Pulitzer Prize-winning novel Tales of the South Pacific by James A Michener and was the fifth work of the famous musical theatre partnership of Rodgers and Hammerstein. It was an immediate hit on Broadway in 1949, and a successful film version followed in 1958. It combines passionate romance in a South Seas paradise, with the realities of a world at war.

On a small South Pacific island, Nellie Forbush, a US Navy nurse, falls for a mysterious French planter whose life-style could not be more different from the conservatism of her own Arkansas background. Meanwhile, Lt Joe Cable arrives to carry out a top-secret spying mission against the Japanese fleet from behind enemy lines. He is befriended by a Tonkinese trader, Bloody Mary, and soon becomes involved with her beautiful young daughter…

US service personnel and islanders 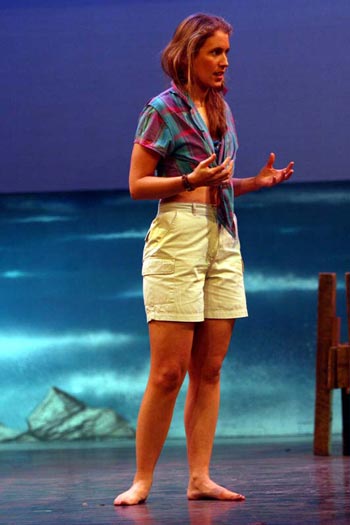 THIS was indeed An Enchanted Evening! The wonderful Sainsbury Singers have succeeded yet again. It really is highly commendable that an amateur company manages to cast its shows so accurately that the leading characters not only sing and act beautifully, but actually look like the characters that they represent – and what a hunky male chorus! There is nothing like a Dame was almost a show stopper! We were under the South Pacific spell from the magical opening overture notes of Ball Ha’i and I loved the gentle beginning with the children, Freya Wilson and Douglas Faulkner (Abigail Rees and David Schult).

The first act just goes from one wonderful hit song to another, Lorraine Meechan was outstanding as Nellie Forbush and her scenes with Brian Bretney, an excellent de Becque, were most convincing. Jessamy Vincent was quite perfect in both singing and acting as Bloody Mary as was Paul Stoneley as Lieutenant Cable. Stephen Cox was superb as Luther and I loved the arm movements of Nicci Rodie (Liat) in Happy Talk.

Rodgers and Hammerstein were not afraid of tackling controversy and it seems that racial prejudice is an enduring problem, but at least in this musical it was overcome by love.

Congratulations to the producers, directors, performers and all the ‘crew’ on a delightful show. 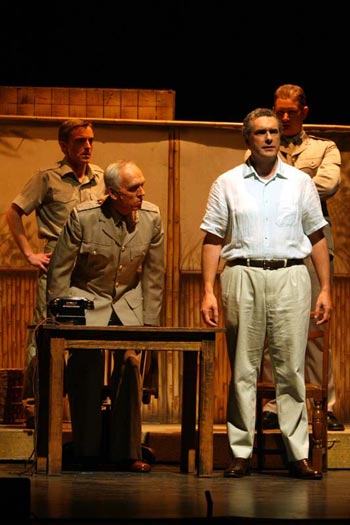 The choice of Rodger & Hammerstein’s melodious musical by The Sainsbury Singers proved a nostalgic winner for the appreciative audience. The story with its fascinating mix of romance, humour, war and racial issues was handled adroitly by all concerned.

Ably produced by Wendy Came with Choreography by Kim Antell and Bella Stebbings, we were treated to an evening of musical delight, accompanied by the orchestra under their Musical Director Michael Sharman.

Lorraine Meechan (Nellie) was the complete epitome of middle class bigotry and her acting was of a very high standard, she endeared with her sincerity. Brian Bretney (Emile) sang most beautifully with immaculate phrasing, his rendering of ‘Some Enchanted Evening’ was superb. Jessamy Vincent (Bloody Mary), the would be marriage broker, gave an appealing portrayal and her singing of ‘Bali Ha’i’ won well deserved applause. For me the star of the evening was Paul Stoneley (Cable) with his sensitive performance and musical singing of ‘Younger Than Springtime’ was a highlight of the show.

The chorus were involved with commitment and vitality throughout this lovely production. 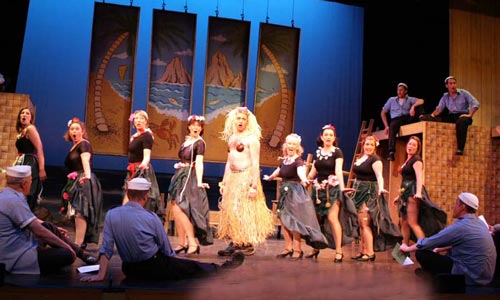 Last week was an opportunity to see one of Rodgers and Hammerstein’s unforgettable productions South Pacific performed by the Sainsbury Singers at the Hexagon in Reading.

Set on two islands in that region during the second World War, it portrays a love affair between a US lieutenant and a young native girl and a nurse from the navy and a French immigrant. There’s much more of course; the war is proceeding and there is much activity at this base (formal and informal).

It boasts some of the most memorable songs of the musicals and has a particularly fine men’s chorus — There is Nothin’ Like a Dame. It’s also a difficult show to stage with a total of 23 scenes! There’s a lot of action and the pace needs to be fast in places.

I accept that the Hexagon is a difficult building acoustically and most singers need amplification to be heard over the orchestra. But this needs to be done sensitively, particularly when there are some support parts without microphones. I’m afraid that most of the time, the sound was very loud, verging on distortion.

However, this is NOT a criticism of the singers at all. I thoroughly enjoyed Lorraine Meechan (Nellie Forbush) who brought a terrific vitality to the part throughout, Brian Bretney (Emile de Becque) very convincing as a middle aged Frenchman and I thought Jessamy Vincent absolutely perfect for the Bloody Mary part. Stephen Cox was really superb as the wheeler-dealer Luther Billis.

I have mentioned the men’s chorus already and it was super. It was a shame that there wasn’t a deep enough bass to take that so famous bottom note. Nevertheless it was a fine performance and it was matched by the ladies in I’m Gonna Wash That Man Right Outa My Hair with superb choreography.

The other excellent work was in the set design and the inter-scene changes. I’m glad to see that the Sainsbury Singers have started to adopt the open stage approach whereby scenes can be changed in situ without being afraid to show the crew working in black. All these changes were very slick and silent and that contributed much to the good pace of the show.

Congratulations to Wendy Carne and her team for putting on an excellent production.