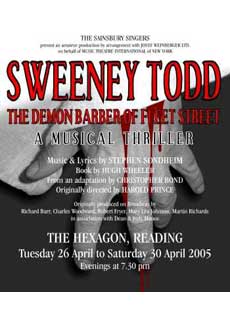 Attend the tale of Sweeney Todd…

The Sainsbury Singers presented Sweeney Todd at The Hexagon, Reading on 26-30 April 2005.

Sweeney Todd is the alias of a man wrongfully accused of a crime and transported to Australia. The barber returns to Fleet Street, only to find that his wife and daughter have disappeared. Todd’s wife, the target of the lust of a judge, was driven to insanity and, he believes, took her own life. His daughter, Johanna, was adopted by the judge who has secret plans to marry her.

Todd meets up with Mrs Lovett, who makes “the worst pies in London”, and together they plot his revenge against the judge and a Beadle who assisted the judge in his nefarious plans. Made mad by his anger, Sweeney Todd begins killing as many of his customers as possible, which Mrs Lovett uses for her pies.

Anthony, the young hero of the play falls in love with Johanna and inadvertently thwarts Todd’s plans. In classic tragic formula, Sweeney Todd’s desire for revenge proves to be his undoing.

“This is Sondheim at his most melodically glorious and verbally acute. The score is captivating and consistently inventive, and just about every song is a highlight”. This isn’t just a dark gory tale set to music – it is laced with with and humour throughout.

This musical thriller was first staged in New York in 1979, at the Theatre Royal, London in 1980 and the Lyttleton Theatre, London in 1994.

“…the songs, the story and the music shone out in this production. The staging was very competent, with a nice revolving pie shop, working oven and versatile stairs and gantry that provided the metropolitan crowded, bustling feel of London.

The high point of the show though was provided by that juiciest of roles, pie shop owner Mrs. Lovett, played deliciously by Kim Antell. Ms Antell managed the often breathless songs (Worst Pies In London, By The Sea) with tremendous grace and comedy, and managed to apply the suitable veneer of compassion to the character. It’s a strange play where the heart lies with the most heartless of characters, Mrs. Lovett and Todd himself who is a cipher, caring for nothing but his single-minded revenge. The secondary love story, between the well sung Anthony (Chris Reeves) and Joanna (Emma Reeves), is entirely secondary and of no real consequence, other than it sets everything in action.

The headlong hurtle of the second act into the depths of tragedy, in which free will is lost and escape is undreamt of, is a great success – this is the easiest part to lost control of in a production, with action taking place in different places concurrently, but the Sainsbury Singers seemed to have especially succeeded with this, to quite devastating effect…”

“Congratulations to The Sainsbury Singers on their latest production of Sweeney Todd, it really is a delight.

On the night I caught this wonderful performance, it was admirably tackled by musicians and singers alike.

This story is of Todd, superbly acted and sung by Peter Cox, who returns to Victorian London after years in exile seeking revenge.

His wife has taken poison and his daughter has become the ward of his enemy, Judge Turpin (well sung by Nigel Wilson).

Mrs Lovett offers him a chance to restart work as a barber above her pie shop in Fleet Street.

To report what happens next would only spoil the fun. Needless to say, the singing was uniformly excellent but Sondheim’s musical also requires accomplished acting…

…Kim Antell was excellent as Mrs Lovett both as an actress and a singer, as was Emma Reeves, as Johanna. I particularly enjoyed the performances of Tricia Hamon and Dan Groves. The main cast was completed by good performances from Rob Latimer and Chris Faulkner.

The staging and lighting were most imaginative and well executed. As always the singing and management of the chorus was extremely good. Congratulations to all, especially the director Wendy Carne and the musical directory Michael Sharman.”