In just three weeks, we’ll be back in the Hexagon to perform Chess. Steve Jewell and Emma Reeves, who play Anatoly and Svetlana, shared their thoughts on the show and their characters. 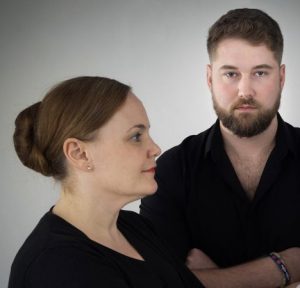 Emma and Steve as Svetlana and Anatoly

Chess is a story of love and politics. Set during the 1980s, a World Chess Championship, between American and Russian Grandmasters, is used as a metaphor for the real-life tensions of the Cold War during this time period; all portrayed by fantastic, powerful and emotive music. The music is absolutely fantastic and is one of my favourite things about the show!

The main characters fight a constant battle to stay true to themselves amidst the difficult political quagmire; and have to make a decision between their love for their countries, love for the people around them, and a love for the game they have dedicated their lives to: Chess.

Anatoly is a character dedicated to his art yet filled with emotional turmoil. He is constantly conflicted between a love for his homeland and a dislike of the modern politics of his country; and torn between his lifelong dedication to Chess, an obligation to Svetlana and his children, and his love of Florence. Similar or not, the powerful emotions written into the music allow me to connect with how my character feels throughout the story.

Anatoly is an absolute dream role for me due to all the wonderful music I get to perform – the show is definitely a rollercoaster of emotions. The power within the music in ‘Endgame’ toward the end of the show is fantastic to be part of. I love the simple but effective harmonies written into ‘You and I’, sung between Anatoly and Florence. But if I had to pick a single moment it is probably getting to sing Anthem at the end of Act 1 and portray all the conflicted emotions contained within; it’s a complete privilege every time I get to sing it in rehearsal, let alone when we get into the theatre for show week!

Chess is a show of love triangles played out against the background of the world chess championships and the now perhaps rather apt politics of the Cold War with a more than a splash of fabulous music by the boys from ABBA and Tim Rice.

I play Svetlana, Anatoly’s estranged wife. We’re both middle aged and married with kids. I also visited Russia 6 years ago in somewhat different times whilst on a Baltic cruise, but that’s about as close as it gets! Although I do often wonder where that young girl who joined the Sainsbury Singers 21 years ago has gone and what I would say to her given the opportunity.

Anyway, as they say, ‘hell hath no fury like a woman scorned’. I don’t think I would chase after Anatoly but I admire Svetlana for standing up to him. You can’t have your cake and eat it! Now we’re running the whole show in rehearsals, I’m thoroughly enjoying letting the lovely Steve Jewell know what I think of him and his womanising ways!

I absolutely love Svetlana’s song ‘Someone Else’s Story’. I love songs that lay bare a character’s thoughts and feelings. It a beautiful song. It’s also great to be singing one of the show’s most well-known numbers ‘I Know Him So Well’, although I can’t believe how hard it’s been trying to remember which bits I sing!

Join us at The Hexagon in May 2022 for a journey from Italy to Thailand via Russia with love. Book your tickets now!